Yesterday I finally managed to ski the central couloir on the big west face of store Lenangstinden. The west face is a one thousand meter rock face streaked with couloirs, on the highest mountain on the north island of Lyngen. The central couloir is the only one that is continuous and it’s clearly visible from the road to Nordlenangen. So close, but still so far away: its got an six kilometer approach on the flat and is just over 1600 meters high, mostly in steep terrain. It’s nothing special compared to the great big mountains of the world, but its huge for being Scandinavia. 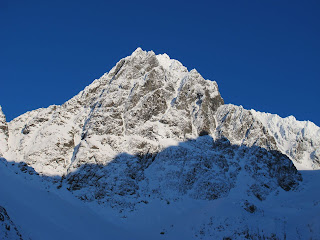 The west face of Store Lenangstinden, Felix's couloir is the obvious line at the middle of the face. At the ramp it goes skiers left in to the exit couloir on the right...
On this, the second try, I set out together with Bjarne for the approach. At the lake below the mountain we separated and he went up on the other side of the valley to find a good filming spot and I continued up the face. This time I did not plan to climb the route but to climb a couloir on lookers left, and then climb the west ridge up to the top. I took a chance that there would be a way through the cliffs on this side, as I had not seen it other than on google earth and on the map.
I was swimming most of the climb with snow over my knees and sometimes over my waist, but I was able to keep a steady pace and at around two o’clock I was standing on the west summit. From there I skied down on the west face for hundred meters and then continued up the main couloir all the way to beneath the summit.
It was a great feeling to get up to the top as I had really felt like this was a worthy challenge in the north and setting out in the morning I was not at all sure I would find a good way to the top. But there I was, and from there it was just the fun part left.
I took of down the couloir that had really good powder snow and it where steep at places. I had to ski it carefully and handle the snow with caution. At two spots I was able to take down small slabs. I was not worried that the whole thing would come down, but the risk lied in getting caught in all the sluff that would take me for a bad ride.
The couloir was an awesome ski and probably the coolest thing I have skied in Scandinavia. It ended in a small icefall and I put in an abalakov an rappelled down and walked thirty meters skiers left, then put in a nut and a knifeblade and did three more quick rappels over the icefalls. With two sixty-meter ropes this would have been one long and one very short rappel in total, but game rules change with a short rope.
From below the rappel I traversed on ledges skiers left, did one small exiting jump down to a ledge just above the big cliff, kept on traversing left, took my skis of and climbed up twenty meters and then continued skiing all the way back to the lake from where I started.
This was a really good day for me and I had a great time. It also feels good to be able to do something a bit more challenging in Scandinavia. I would say that the feel of this ski reminds me of Mallory on the north face of Midi in Chamonix and, although a little bit less steep it have the complexity, challenge, exposure, grandeur and quality of skiing to be rated among the big classics in Cham.
For the number people; lets say TD, 5.3, 5 or something like that. And the name: Felix’s couloir, for great and late friend Felix Hentz… 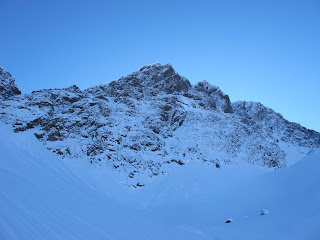 The face seen from below 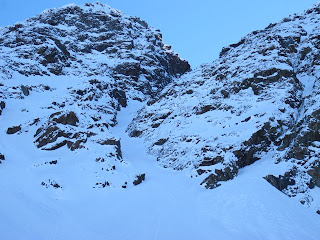 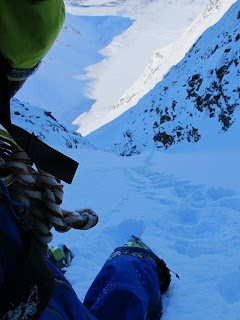 Climbing about half way up 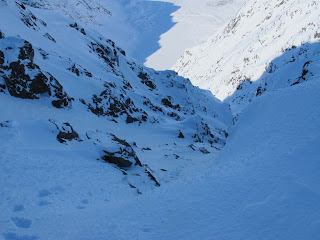 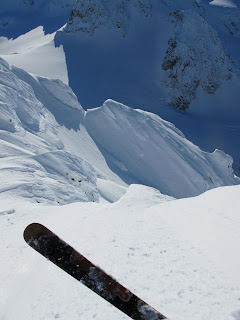 Just below the top pinnacle before i start skiing 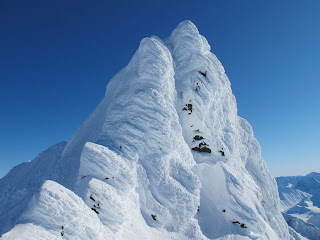 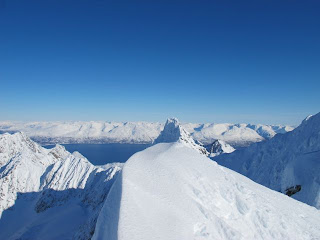 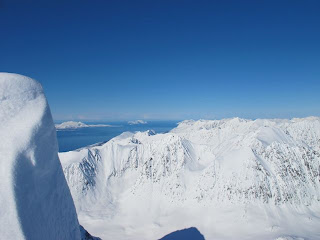 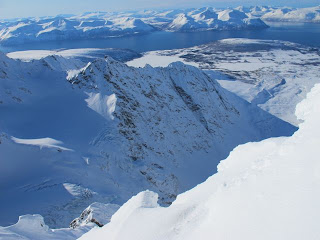 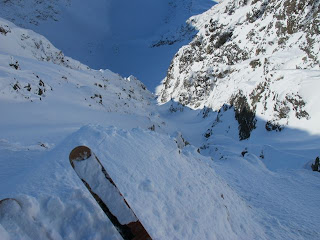 Almost half way down the couloir
Posted by Andreas Fransson at 21:16