The adventure of the day for me was again set to the Argentiere basin. Col de l'Aiguille Verte has been looking really filled in, specially for being January, so I took a chance and went there today with filmer Bjarne Sahlen. He belayed me over the bergschrund and then stayed in the valley filming and taking pictures.
It was excellent conditions with chalky snow that’s easy to climb and great to ski. My plan was to do the normal route climbing the face in the middle and then traverse lookers right on the upper snowfields in to a hidden (on the picture) couloir. I have done it two years a go with David Rosenbarger and we had a great and steep run, but I have for years been looking at the direct line to the col to the right of the hanging glacier. Today the face was even more filled in than last time and I started talking to Bjarne on the radio while I was climbing. He thought he saw a kind of filled in line all the way to the top. It still was fairly thin, but it was better than I ever seen it so I thought I had to give it a try.
Col de l'Aiguille Verte is famous for being steep, but I got amazed on how much steeper the direct line where. Small and thin snow patches where quickly leading me to the top of the run, but I also had a hard time understanding if it was going to be possible to ski slopes as steep like that. I could feel the ice underneath the snow with my crampons for every step and was making sure to put my track in where I could find best snow coverage so I would have something to follow on the way down.
There where a couple of hard cruxes on the way down combined with really steep turns in good chalk snow. I had to do two short rappels over ice bulges and also about fifty meters of sidestepping where the snow was just to hard or to thin. Because of that I wouldn’t say I did a clean decent, but I had a great experience from a good challenge and I’m happy to ski a line like this early in the season.
A short film is on its way and in the meantime check out Bjarne’s blog at endlessflow.posterous.com 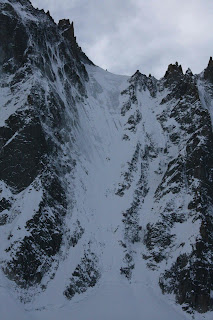 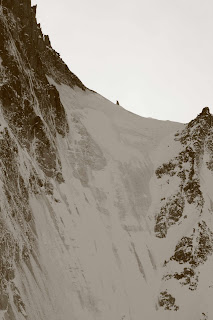 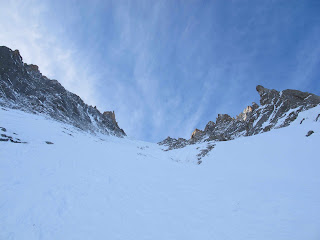 Looking up the face 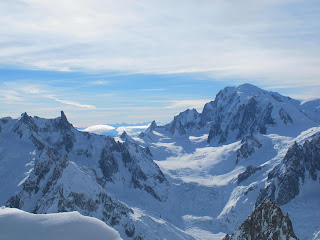 View over the Mt Blanc range from the summit 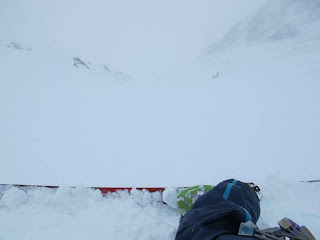 Taking a rest in the fog
Posted by Andreas Fransson at 21:21