Failure on Jiehkkevarri – Or, how we climbed and skied the normal route on Holmbuktstind in a snowstorm

On Monday we went to try Jiehkkevarri, the highest mountain in Lyngen, together with Patrik Jonsson (CEO on Magic Mountain Lodge) and Fredrik Aspö.
Our intention was to traverse the whole island via the highest mountain on in Lyngen and then try to spice it up on the way down. We wanted to check out the south face and we also had a great plan B in mind.
We started out early in the morning in good and clear weather, but the clouds where on their way in. The forecast up here is really unreliable so one just have to wake up and hope for the best in the mornings. We where hoping that the clouds would disappear while we where walking so we started up the normal route via Holmbuktstind.
To make a short story even shorter; the weather did not improve – it got much worse and when we where on the big glacier between Holmbuktstind and Jiehkkevarri we could not se much else than each other. We knew that if we would manage to find the summit (that is hard to find in good weather, because its so flat) we would still not be able to do any kind of interesting skiing. So we retraced our tracks and skied down the same way we had come. We got some good turns and got back to the lodge in good time for Mintu hot chocolate.
It was just another good day in the mountains with around 1700-1800 vertical meters of skinning. I felt a bit disappointed though, as this one would have been a great ending to our episodes and we did not have many days left.
All photos below are taken by Morgan Sahlén: 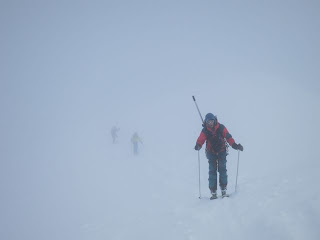 Bjarne walking in the snow storm 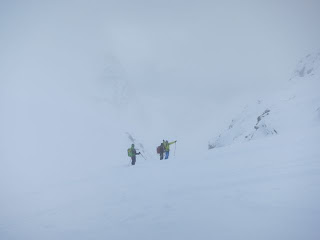 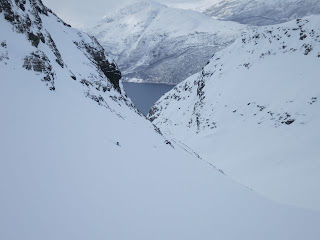 Myself skiing some powder 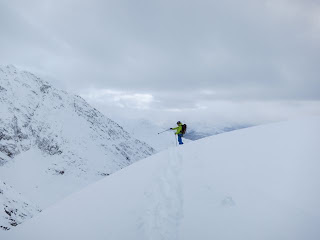 And asking Bjarne where to go 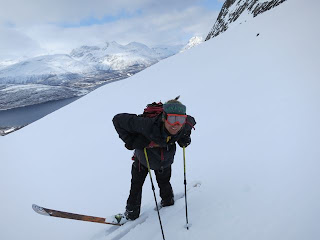 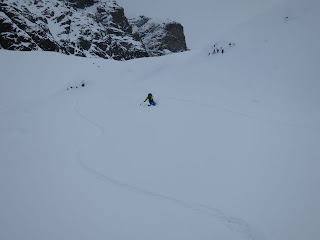 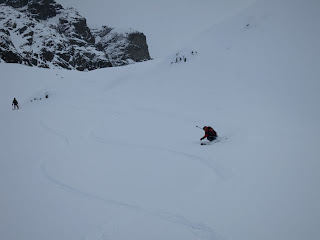 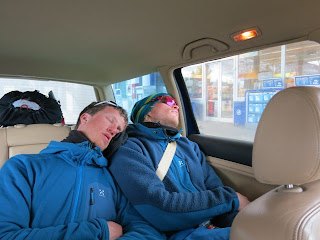 Both Bjarne and me visited other realms after skiing
Posted by Andreas Fransson at 14:44