Last week, just before I went to Finland I wanted to have a big day out as a good ending to my visit to the north of Sweden and Norway. One of the few mountains I hadn’t climbed and skied in the area was also one of the most mythic ones – Kuinartjåkka. It’s a rock pyramid just in the middle of the Narvik and Skjomen mountains and is usually made as a two day ski tour from the Lossi huts. I had long a go spotted a line on the north east face that looked skiable and natural and I have ever since always wanted to ski it. Memory can though, as you sure know, remember things much better, nicer, more beautiful etc, as they really are. This I got to recall when I finally reached the mountain after a long approach. The mountain has about 1600 m vertical all and all and a few hours approach and in quality vertical meters it rises 800-900 meters from the lake making the line I had imagined on the north east face quiet something if it would have worked. But, arriving in front of the face I could see it wouldn’t really work out in reality without being contrived so I just kept on going around the mountain to the normal route. 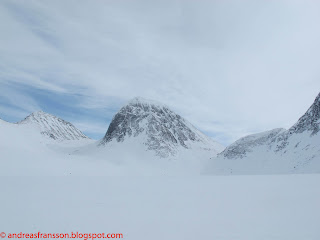 Kuinartjåkka, with my contrived ski line in the center
I climbed this in an ocean of stratugis all the way to the summit ridge where I met a ten meter 70 degree step in sugar snow where I was really glad I have brought two ice axes for the short climb. After this I stood at the top, happy just to be out, by my self in this wonderful location. It felt like a soulful way of ending my stay up in the north.
For the ski down I had no intent what so ever to go near the slopes I climbed up as that would have offered the worst skiing in my life, so I aimed for a fairly contrived line on the east face that was steep and exposed and not really fun to ski, but at least it was more exciting than the way up. I can put a few kronors on that no one had skied it before, but this is probably more due to something else than my skills…
But in the end I got my long day out in the mountains, I felt tired getting back to my car and all in all my experience from trying to ski new lines is that I only succeed with about 25% of my tries. But if they would all go it wouldn’t be an adventure, would it? And I usually don’t like to try on things I know I will succeed.
It was well past Swedish dinnertime when I got back to the car (remember though, we eat dinner much earlier than in south Europe) and it was late when I returned to Björkliden. 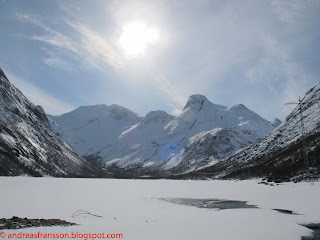 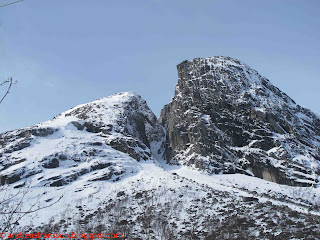 Passing by skamdal couloir, on of the nicest ski decents in the area 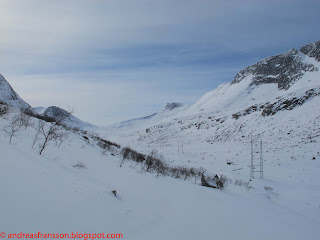 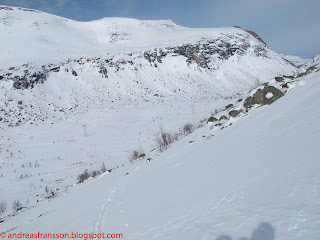 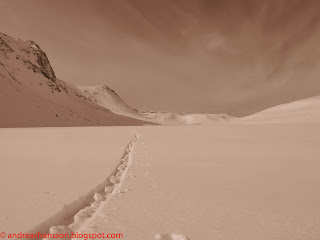 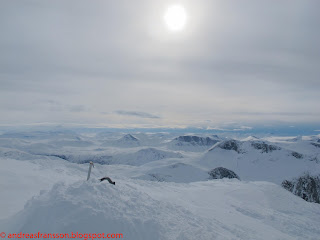 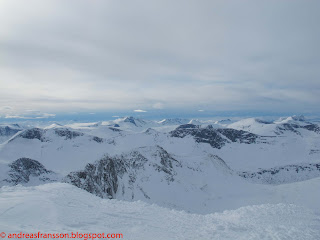 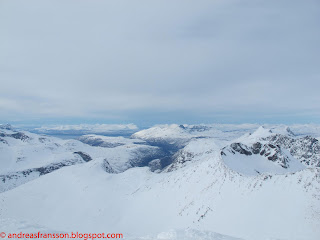 again, this time with the ocean far away 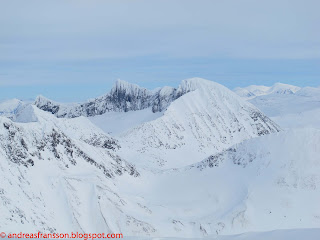 Storsteinsfjäll with the storstein couloirs in the foreground. Great skiing on the forth highest mountain in north of Norway...
Posted by Andreas Fransson at 09:52