It has been a strange winter this year with the conditions in the mountains around Chamonix. Skiing wise, it has been a pretty good winter for powder skiing, but it’s been long in between the magical days and the snow cover we have gotten used to in the last few seasons never came.
In January we got a few rainstorms making for spring conditions in the mountains and great steep skiing but after that it’s been relatively dry.
Dry and warm winters means dangerous glaciers, bergschrunds and mountain faces. Weak bridges on the glaciers is giving you a round of Russian roulette every time you are out there putting the first tracks on the glaciers or want to get on a mountain face for a ski or a climb. And while you are on the faces there are rocks that normally is dead frozen to the mountain that trough melting starts raining from the sky.
It has been a great Chamonix season in many ways with highlights on the great alpine climbing conditions as well as some of the few, but ohh so good, powder days in Courmayeur and Helbronner. The best thing with Chamonix for me is it’s edge – the high end skiing that make up for about 50 % of its terrain but is only accessible for maybe less than 1 % of the skiers. This is what for me makes Chamonix the best ski resort in the world with no stress on powder days, no waiting in lines and still being able to ski more great snow than you can handle.
This year the more advanced skiing has not been in as good condition as the last few years and with the poor cover on the glaciers I have for some time had a gut feeling telling me its time to back of. With lots of friends dying and getting hurt and a bad foundation for the spring skiing it finally became an easy decision to leave Chamonix for my home mountains in the north of Scandinavia where we are having one of the best winters in years.
I’m sure there will be awesome skiing still in Chamonix this year, but with a few added bullets in the clip in the game of Russian roulette that the mountains always want to play with us. And gut feeling is the last thing, I have learnt, that we shall ignore in the mountains. 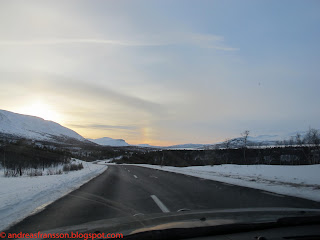 Evening light in the north, finally getting the first glimpse of the Swedish mountains
So I jumped in to the car and drove up north (the 3500km) to the calm little ski resort of Björkliden, far north of the arctic circle, to enjoy April before my and Max’s adventure to Alaska in May. On the wish list is to ski a few old projects in the neighbourhood, find some nice lines to climb, hang out with the great people up here, lots of running and training and of course enjoy just being in Sweden. 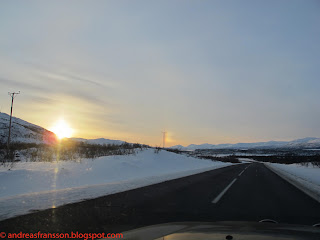 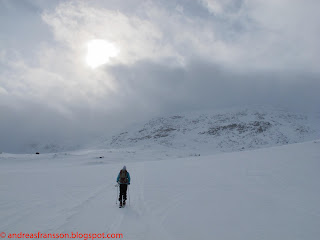 The first real ski tour of the season for me in Sweden on the classic Vassitjåkka. Johanna leading the way... 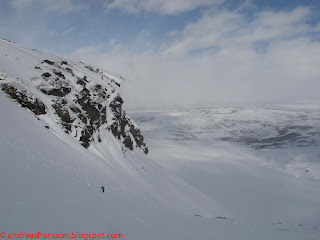 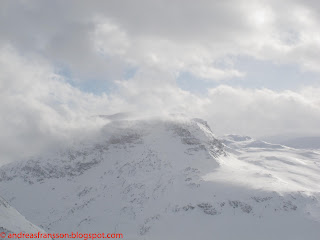 The view from the top, Voitasrita with its famous ski; the Triangle 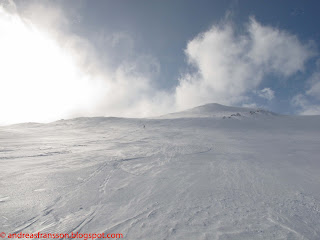 Skiing down in good cream 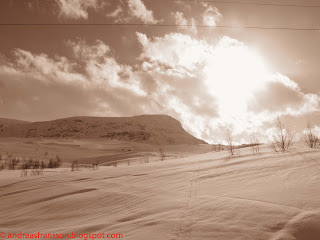 Vassitjåkka north summit, the mountain of the sun...
Posted by Andreas Fransson at 22:59