The most classic ski descent on Denali must be the Messner Couloir above ABC. The 1500 vertical meter couloir could be the Gervasutti (the most classical easy steep ski in Chamonix) of North America and it’s often the objective for skiers coming to Denali. I really wanted to ski this classic and I knew I would never come back to Denali just to ski this single couloir so I went for it on the second day after we where back from Cassin.
The weather was not very good, with strong winds and fair visibility.  But on the other hand it’s a couloir and the navigation was easy and the snow stable. It took me about 5 hours to climb the couloir, but then again I was exhausted long before I started. Most of the couloir was filled with knee-deep snow making the tracking hard work. At the upper parts the wind was really strong and it was cold. I climbed up to the top of the couloir close to the Football field, but I did not go all the way to the summit because the weather was really bad and I was just after the couloir not a third summit ascent.
It felt refreshing standing at the top of the couloir in the storm and it was with a smile that I took of with the first turns down my last ski on Denali. The skiing was not perfect with a bit of powder here, a bit of stratugis there, but I enjoyed every bit of it. At one point I ended up on blue ice, but I just dug my axes in, put my crampons on and down climbed 15 meters before I kept on skiing.
At the end I traversed the schrund, took my rope and extra clothes that I had left there on the way up and cruised down in the fog all the way down to camp.
It was a nice and easy solo adventure without too much pulse, but I could definitely feel that my body had had enough of this strain. Eating dinner that night I felt like the Denali mission was accomplished and that it now was time to get down to enjoy the thick air. 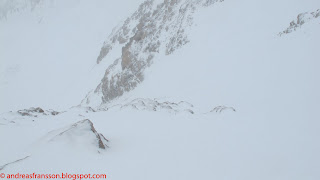 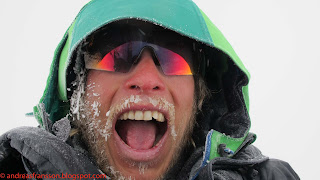 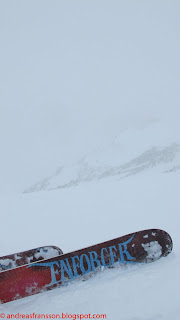 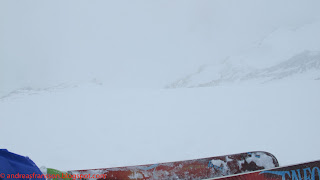 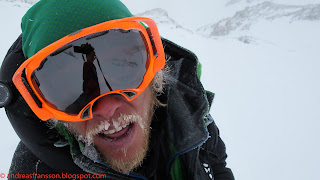 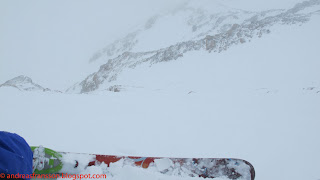 Posted by Andreas Fransson at 17:19